Julian and Conrad for Hindhead

Volunteer to help Julian and Conrad for Hindhead win!

Donate to help Julian and Conrad for Hindhead win!

Hindhead and Beacon Hill voters have a fantastic opportunity to back Julian Spence and Conrad Waters on Thursday 23 June, to get hardworking local councillors AND send the Conservatives a message - they've let us all down.

Two local residents, Julian Spence and Conrad Waters have put themselves forward to represent Hindhead and Beacon Hill at the Borough and Town Council elections on Thursday 23 June and ask for your support and vote at the polls. 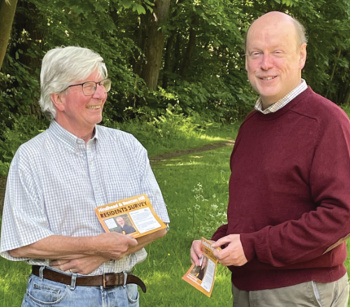 “It’s so important that our new local councillors work hard for the area. Julian and I believe the job of a local councillor is to ask people’s views regularly, fight their corner and keep in touch about the results. Your Lib Dem councillors, Jerome Davidson and Geoff Whitby, have a track record of doing just that and we would relish the opportunity to join them.”

A resident of Hindhead for nearly thirty years, Conrad Waters previously served as a Town and Borough Councillor in the 1990’s. During this time, he secured investment in the Eight Acres Adventure Play Area and the refurbishment of Grovers Gardens. He was part of the campaign that lobbied central government for the approval of the Hindhead Tunnel and fought hard to ensure funding for various local groups.

Julian Spence, candidate for Waverley Borough Council, went to school in Hindhead and, for the last 24 years, has lived in Churt with his wife and their two children. He knows the issues that matter to local people. Julian recently retired from a career in risk management and now wants to give back to his home community.

He is a regular volunteer in the community, a parish councillor in Churt, and has recently welcomed a Ukrainian family fleeing the war into his home. He passionately believes that local councillors should listen to residents, treat them with respect and not take them for granted.

Fighting your corner on big issues: Demanding real action to tackle the cost-of-living emergency, to help struggling families and pensioners, and urgent action to address the NHS crisis so that local people don't have to struggle to get a GP or NHS dentist appointment, or wait hours for an ambulance.

Listening to you and getting things done: Julian and Conrad believe the job of a local councillor is to listen to residents’ views and take action to address their concerns. From working to get potholes fixed by Conservative-run Surrey County Council and fighting Tory government planning rules that allow inappropriate development, to supporting our local businesses, they will be on your side.

Provide competence, integrity and honesty: Julian and Conrad will put your best interests first and not take you for granted. They will be caring, principled and hard-working local councillors and a strong voice for our area that we can be proud of.

Don't forget to make your views known on Thursday 23 June and support Julian Spence and Conrad Waters to represent Hindhead and Beacon Hill.