With our new leader and clear policy on Brexit, Liberal Democrats are riding high.

Four opinions polls in just the past week have shown us at or above the level last seen at the height of Cleggmania, in 2010/11:

(Three of these, from YouGov and Ipsos, have us leading or snapping at the heels of Labour).

Different poll results have different implications in terms of seats. For example, based on the ComRes poll the website Flavible Politics projects a total of 83 seats for the LibDems at the next election - including SW Surrey, and also Guildford, Mole Valley, Woking and Eshar & Walton (among many more) ).

Flavible projections based on other poll results are not quite as favourable to us, but still show SW Surrey as marginal. (For the YouGov Sep 19th poll, the Flavible projection has Conservatives on 31% and Liberal Democrats on 29% - just 2% behind).

Different polling companies use differing methodologies, and can produce different results. What matters in trying to read the tea leaves, is the underlying trend. The poll tracking company Britain Elects has a continuously updated graph showing a smoothed average across all polls - which clearly shows that we are how high we have come since the last general election.

The most important polls are not opinion polls, but those at the polling booth.  Last month we gained a Welsh parliamentary seat in a by-election, and across the country, in local by-elections since May 2nd, LibDems have taken more votes in total then either the Conservatives, or Labour! Election Maps UK  has a regular weekly Twitter chart showing cumulative (local) by-election totals since May 2nd, since the beginning of 2019, and since the 2017 general election.

Here is the graph for results since May 2nd:

While the LD share of the vote has gone up by 11%  from the previous results in these wards, the Conservative share has dropped by 4% - and Labour's by 8%. Or, for the actual vote totals, Election Maps UK also has these: 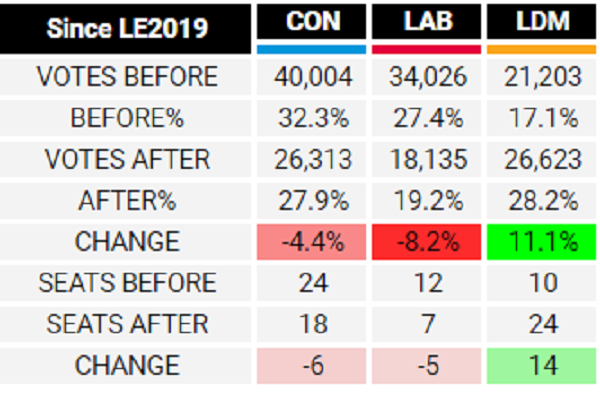 In addition to out new MP in the Brecon by-election, six more have joined us from other parties, in just the past few months. While both the other major parties are hopelessly divided, Liberal Democrats are clearly united and enthusiastic. This shows in Swinson's personal ratings in the polls. In the latest from Opinium (the only one thus far that tests "preferred Prime Minister" against four party leaders and not only Conservatives and Labour), Jo Swinson comes out ahead of Corbyn!. (Several other polls have shown her net approval rating better than Corbyn's - even among Labour party voters).

We have the momentum, we have the leadership we need. With the wind at our back, a win in South West Surrey, which a short while back seemed impossible, now appears to be increasingly plausible.

Can you help us to get rid of Jeremy Hunt?

We need to put the maximum possible effort into this campaign. We need:

Deliverers to distribute leaflets and letters, either in their own neighbourhoods, or further afield.

Data entry people, to record information collected by our canvassers.

Canvassers, out knocking on doors or telephoning to collect information.

Householders willing to display posters or stakeboards at their homes.

MONEY - to pay for leaflets and advertising.

If you can help, with just an hour or two at a time, or with a donation, write to