Godalming Central & Ockford will be going to the ballot box on Thursday 23 June to elect a town councillor for the ward in the place of Lib Dem Anne-Marie Rosoman who, sadly, has had to stand down on health grounds. Tom Kiehl would be a fantastic addition to the Lib Dem team for the ward of Paul Follows and Adam Duce. He is a local resident who brings lots of leadership experience through his work at an industry trade body.

Tom lived in Godalming before moving to London for work, but during lockdown, moved back home to Godalming with his wife and young son. For work, he plays a leading role in a trade body organisation for the music industry, which has included leading the sector's response to the pandemic and supporting the sector through unprecedented challenges that have affected arts and culture. 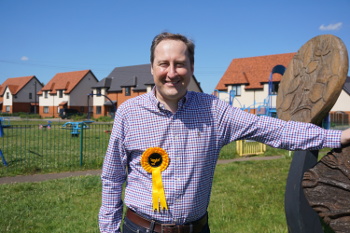 Tom is hoping to bring his experience to bear on unlocking talent and potential among Godalming's young people. He would use his experience and knowledge to support projects that tackle anti-social behaviour, if residents support him on Thursday 23 June to become councillor for Godalming Central & Ockford.

The Godalming Lib Dem team has a strong record of improvements at the Town and Borough councils, including the successful launch in May 2022 of Godalming's new Youth Services at Broadwater Park to provide the youth services that should be offered by Tory-run Surrey County Council. It has been extremely busy, catering to dozens of young people visiting daily. Every visitor can count on experienced youth workers who are able to provide an important and positive intervention in young peoples' lives.

Don't forget to make your views known on Thursday 23 June and support Tom Kiehl for Godalming Central and Ockford.